ASX-listed coal junior Universal Coal has proven its Delmas-based Kangala Colliery to be a reliable and consistent supplier to Eskom, having improved its coal quality a few years back and thereafter upped its production to meet the power utility’s increased demand.

To maintain this performance moving forward, the company has acquired a significant percentage in the Eloff project – which is contiguous to Kangala and will extend the four year-old mine’s lifespan by at least 20 years.

Increasing Kangala’s production output in quick response to Eskom’s need for more coal in 2016 has enabled Universal Coal to establish a solid reputation of reliability and trust.

Although the company’s original plan for Kangala was to produce 166 000 tpm of saleable coal (excluding a small export percentage), it quickly increased its output to 200 000 tpm and from this point has never looked back.

“This required us to increase our run-of-mine (ROM) rate from around 3.2 Mtpa to about 3.8 Mtpa which we implemented quickly and effectively with our mining contractor,” Kangala general manager Petrie Erasmus explains.

“And while this reduced our mine life by about two years, our ability to mine at a faster rate and process more than we planned for has subsequently improved the overall economics of the project,” Kevin Donaldson, Universal Coal’s chief development engineer adds.

Kangala’s current pit is approaching the end of its life and while the life extension plan for the mine entailed opening up the nearby Middelbult block, the acquisition of a contiguous coal property has repositioned the mine in different, and far more exciting position.

In November 2017 Universal Coal announced the acquisition of 100% of the shares and claims in Manyeka Coal Mines, the owner of 51% of Eloff Mining Company which in turn owns 100% of the Eloff project.

It also increased UCDIV’s shareholding in Eloff Mining Company to 80%, having already secured a 29% stake in the company earlier.

The deal equates to a 39.2% shareholding in the Eloff project by parent company Universal Coal.

“Not only is Eloff directly contiguous to our current Kangala pit, separated quite literally by a boundary fence. This will enable us to open up the new mine quickly, which also offers high coal quality that are in fact similar to Kangala’s. It made perfect sense to purchase the property in order to extend Kangala’s lifespan as we can now simply continue mining in the same area,” Donaldson points out.

The Eloff project comprises two prospecting rights covering an area of 8 168 ha. In addition to these mineral rights, Eloff Mining Company also owns the surface rights to 6 146 ha of the project area which cover most, if not all, of the areas identified for expansion at Kangala. The property has a SAMREC compliant coal resource of 424 Mt.

“This block alone equates to a lifespan of at least 20 years if we were to continue mining at our current rate,” Erasmus confirms.

At present, development and mining-start-up at Eloff remains dependent on two legislative requirements – a mining right and an integrated water use licence application (IWULA).

Donaldson says the company is expecting the mining right to be issued before the end of the year.

It was first submitted by the previous owner. The IWULA is on track to be submitted this year as well and the company has every confidence that the approvals will be obtained within the 300-day timeframe government has committed to.

Naturally Universal Coal is looking to start production at Eloff before or as the Kangala colliery operation winds down.

Both Donaldson and Erasmus are confident that timing will work in their favour.

“We need only three months to open up a box cut at Eloff to start mining.”

And while the plan for now is to maintain the same production output from Eloff as Kangala has been delivering, Donaldson notes that this will ultimately be determined by Eskom.

“If they want more coal, we will deliver more coal.”

This would also necessitate larger processing capacity which Universal Coal will consider delivering via a new plant or alternatively expanding its existing plant.

“Our relationship with Eskom has been truly positive over the years and we are confident that we will continue supplying the utility well into the future. This will require negotiations with Eskom to include Eloff once we have secured our mining right.”

Down the line, Universal Coal will look to open up additional blocks within the Eloff property, and will do so easily considering a pre-feasibility study already exists for the central area of Eloff, but this is not an immediate priority considering there is more than enough coal to mine right next door to the existing Kangala colliery.

The settlement of the Eloff acquisition price of approximately R90 million will be funded through internally generated cash flows from Universal Coal’s operations.

NCC has been fully operational since July 2017 and has been delivering positive cash flows and EBITDA since August 2017.

The mine is expected to deliver on its committed sales tons of 2.5 Mtpa from 2019 and has a remaining life of mine of 20 years.

Ingwenya redesigned two of the plants by replacing the cyclone units with three-product-cyclones units which are capable of producing A and B grade coal in the same vessel.

The company’s 4 000m2 engineering workshop, enabled it to fabricate all the structures to fit in the three-product-cyclones units in a short period of time, while carrying on with the normal plant production using normal cyclones units.

The units were swopped during a 24-hour shutdown and minimized production loss.

Ingwenya also designed and built the new ROM with a capacity of 300 tph which is currently in operation feeding the two of the three modules.

Universal Coal has invested in building three 2 million litre SBS Water Systems’ SBS Tanks on site at Kangala – with the aim of preserving water and reducing excess evaporation at its pollution control dam as well as the mine’s reliance on Randwater.

Our coal operations and projects 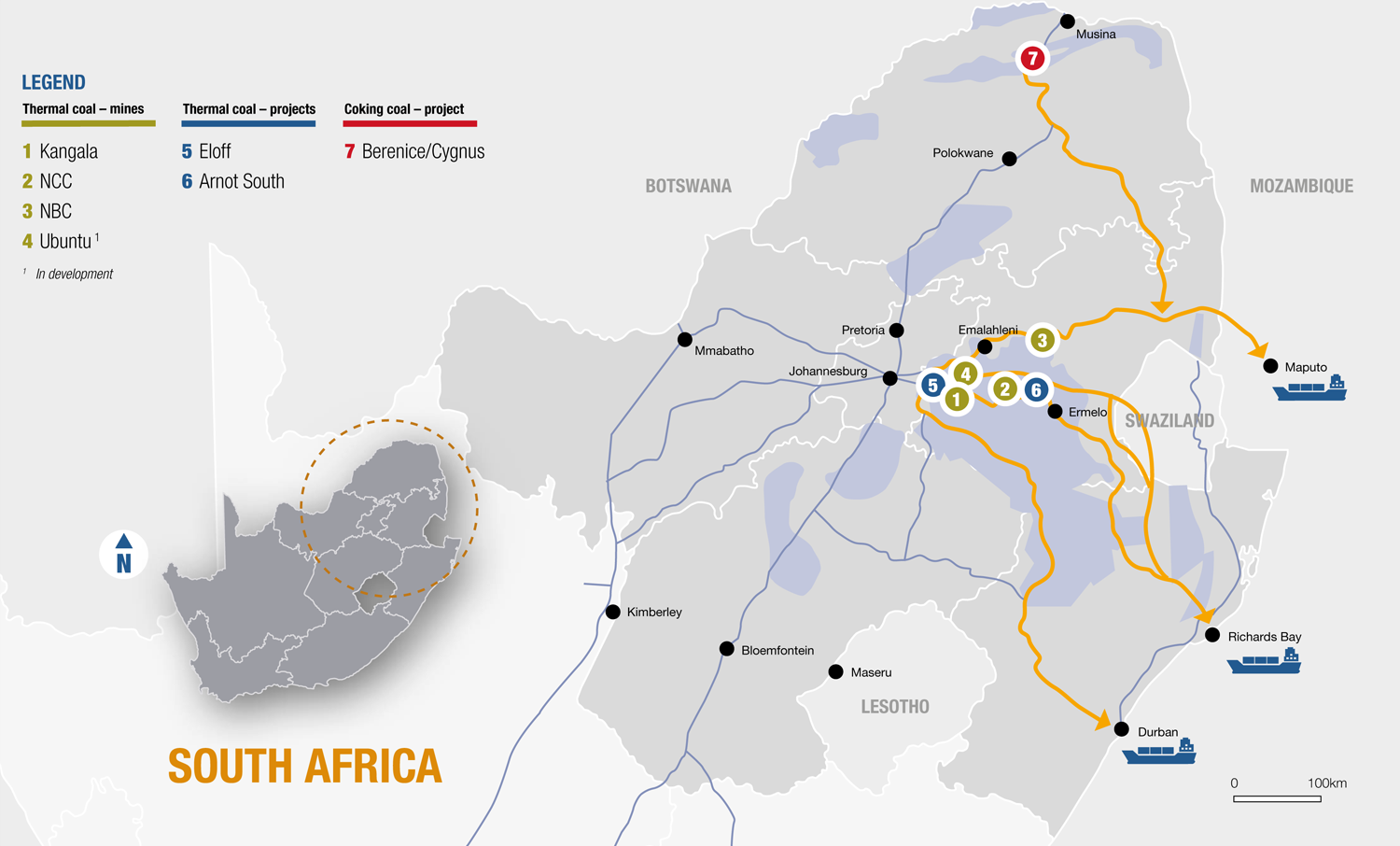